The heartbreaking and devastating effects of Hurricane Ian in 2022 can teach us a valuable lesson on the rebuilding efforts which can be improved upon regarding the durability and sustainability of new homes to be constructed in the future.  Prism Architecture has been in business for over 20 years and familiar with repairs on prior hurricane damaged structures such as Hurricane Jeanne in 2010.

To better understand how a structure can be more durable and sustainable, we first must examine the foundation and structural method, where the project is geographically located and at what level the finish floor is in relation to the flood zone it is located within.

Building codes are enforced only as a minimum requirement but depending on the region such as low lying coastal areas on the west coast of Florida, building design requirements should be enhanced to meet the minimum requirements according to the high velocity section of the Florida Building Code which deals with higher wind speed.  Conversely, coastal regions on the west coast of Florida are not required to meet the same wind speeds as found in SE Florida although a Hurricane can go anywhere.  In our professional opinion, all coastal regions should be treated equally and constructed as the high-velocity hurricane zone design requirements as defined in section 1616-1626 in the 2020 Florida Building Code, Building, 7th Edition.  https://codes.iccsafe.org/content/FLBC2020P1/chapter-16-structural-design#FLBC2020P1_Ch16_Sec1616 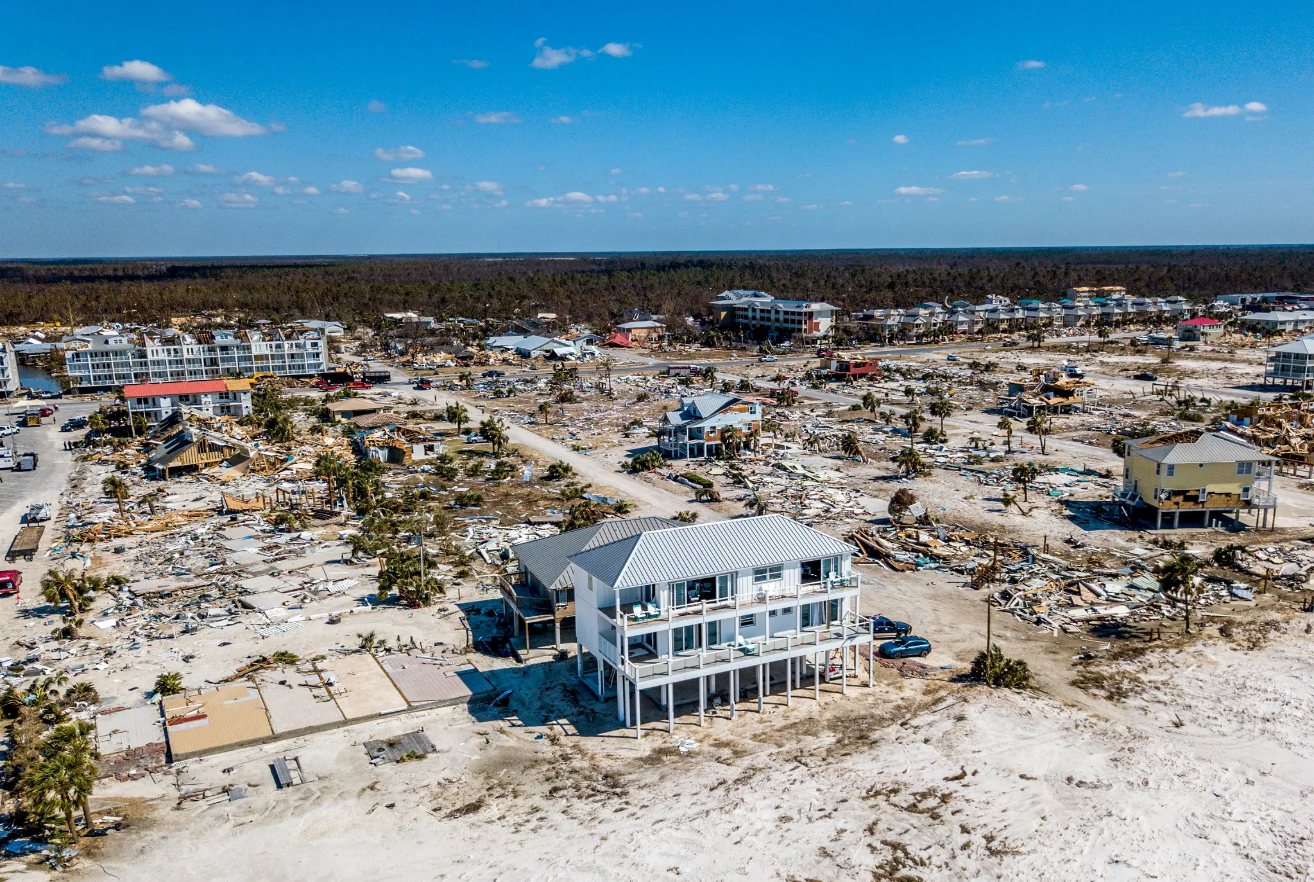 The elevated house that the owners call the Sand Palace, on 36th Street in Mexico Beach, Fla., came through Hurricane Michael almost unscathed.Credit…Johnny Milano for The New York Times

Changes to the 2021 building code increased the ultimate wind speed requirements in building types risk category 2, exposure C such as Key West was revised to 200 mph up from 180 mph but any of the coastal regions on the west coast of Florida within striking hurricane such as Tampa, FL are only required with a wind speed of 150 mph. As you can see on the map below, even some areas of NW Florida are only required to resist 130 mph winds for a 3 second gust. 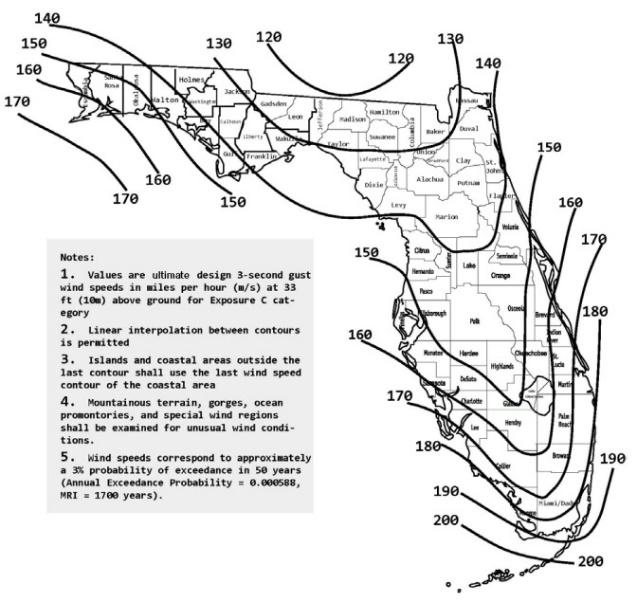 In our opinion, all homes located on any coastal region should be treated equally.  To increase a home’s durability for increased wind speeds is less complicated and not as expensive as you may think.  Simple design considerations such as double strapping hurricane straps, blocking between roof trusses to create a stronger diaphragm for the roof sheathing by providing blocking between the parallel roof trusses in addition to bracing prevents the roof structure from torque and stress.

As we have seen what really causes the most severe damage in a hurricane sometimes is not the wind, but the storm surge.  A powerful wall of water can knock down almost any structure.  If you’re you’re located further inland at least some erosion under the foundation can occur compromising the structure.

Any new structures first level habitual finished floor elevation must be at or above the flood zone considering 100-year storm calculations were used but as we can see during Hurricane Ian it was estimated as a 500-year flood.  Flood mitigation plans and finish flood elevation requirements set forth by the local building department are vital to safety.

The reason most of the building that were washed away in Hurricane Ian was because of the level they were at and their foundations were not substantial enough handle such a powerful storm surge. To examine how we can improve the durability, let’s look at some various foundation types:

First there is the common monolithic footer also known as a foundation directly on or just below grade level.  These are most prone to some type of erosion as the bottom of the footer is just below the grade. Below is a picture of a typical monolithic footer slab on grade that was compromised. 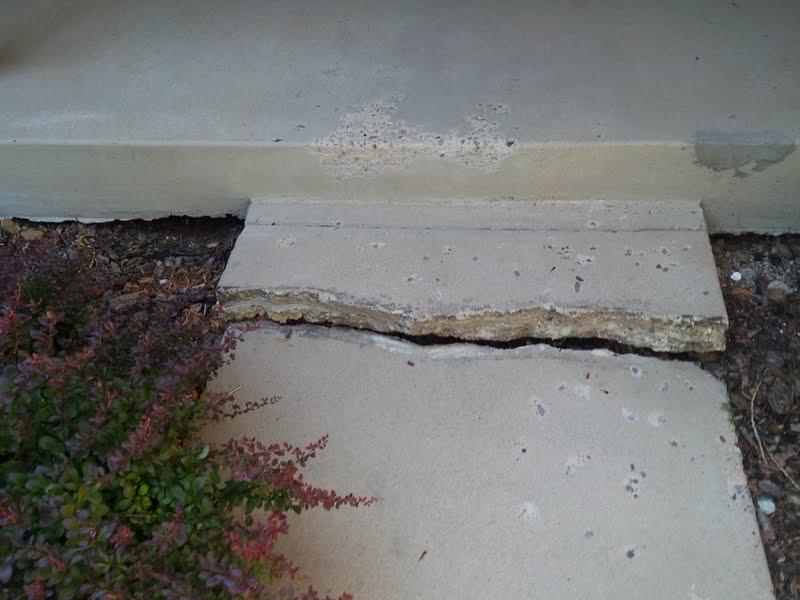 Depending on the flood zone, some local jurisdictions have banned monolithic footers and required a stem wall footer also known as a spread footer.  This is a more durable footer that extends well below grade then spreads out.  Since the bottom of the footer is 2-3 feet below grade, less erosion occurs. These types of foundations are common but do cost slightly more than monolithic footers. 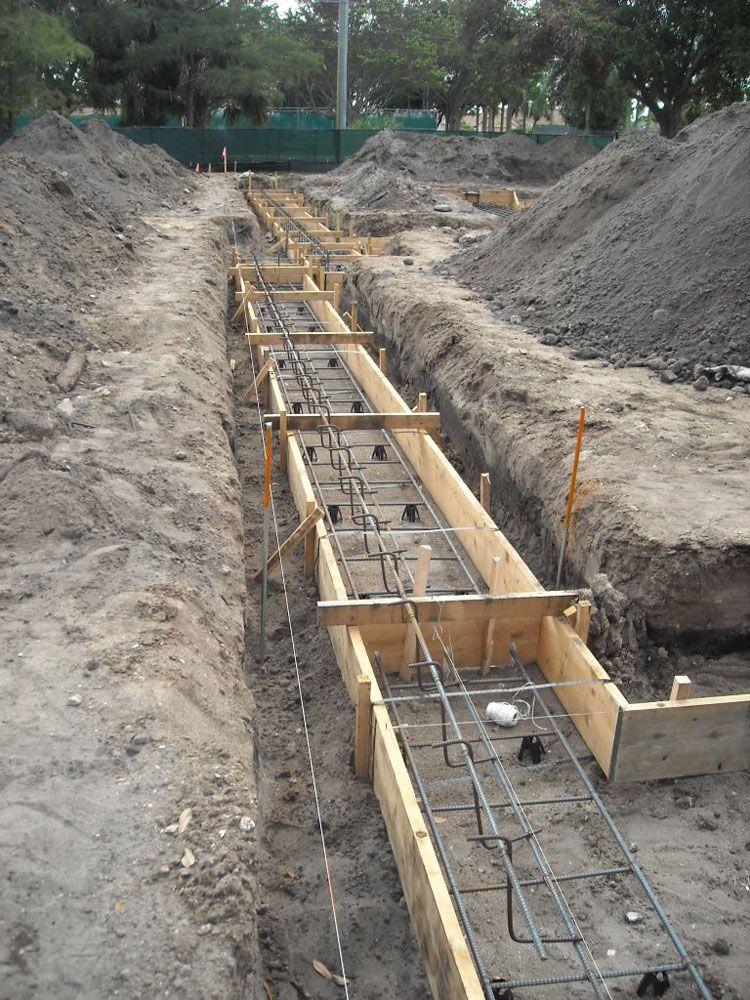 From experience during working on homes during Hurricane Sally during 2004, some of the homes that were raised on pilings but were constructed with wooden pilings which when the storm surge came on shore bended the base of the pilings. These wood pilings were not deep enough nor braced at the bottom and diagonally which led to the collapse of the structure above.

The best method of construction for homes on coast regions are of concrete piles, braced at various levels with a elevated structural concrete floor slab and preferably a flat concrete roof.  There are various products on the market such as a post tension concrete floor slab or even prefabricated concrete panels such as a Hollow core system.

Grade level CMU (concrete block) walls should be designed to breakaway during a storm  and although the soil may be suitable to storm.  Habitual areas such as living rooms and bedrooms exterior walls should be protected not simply with filled cells but cast in place concrete tie columns for lateral forces.

Concrete pilings are tension pilings and should be installed deep enough to not just carry the weight of the house but to resist a wall of water during a storm surge.   Columns should extend to the roof where possible creating a strong grid throughout the home.  Although nothing can stop some disasters, this method of horizontal bracing should mitigate damage to the structure.   Installing large missile impact glass designed primarily for high-rise construction should also be used. 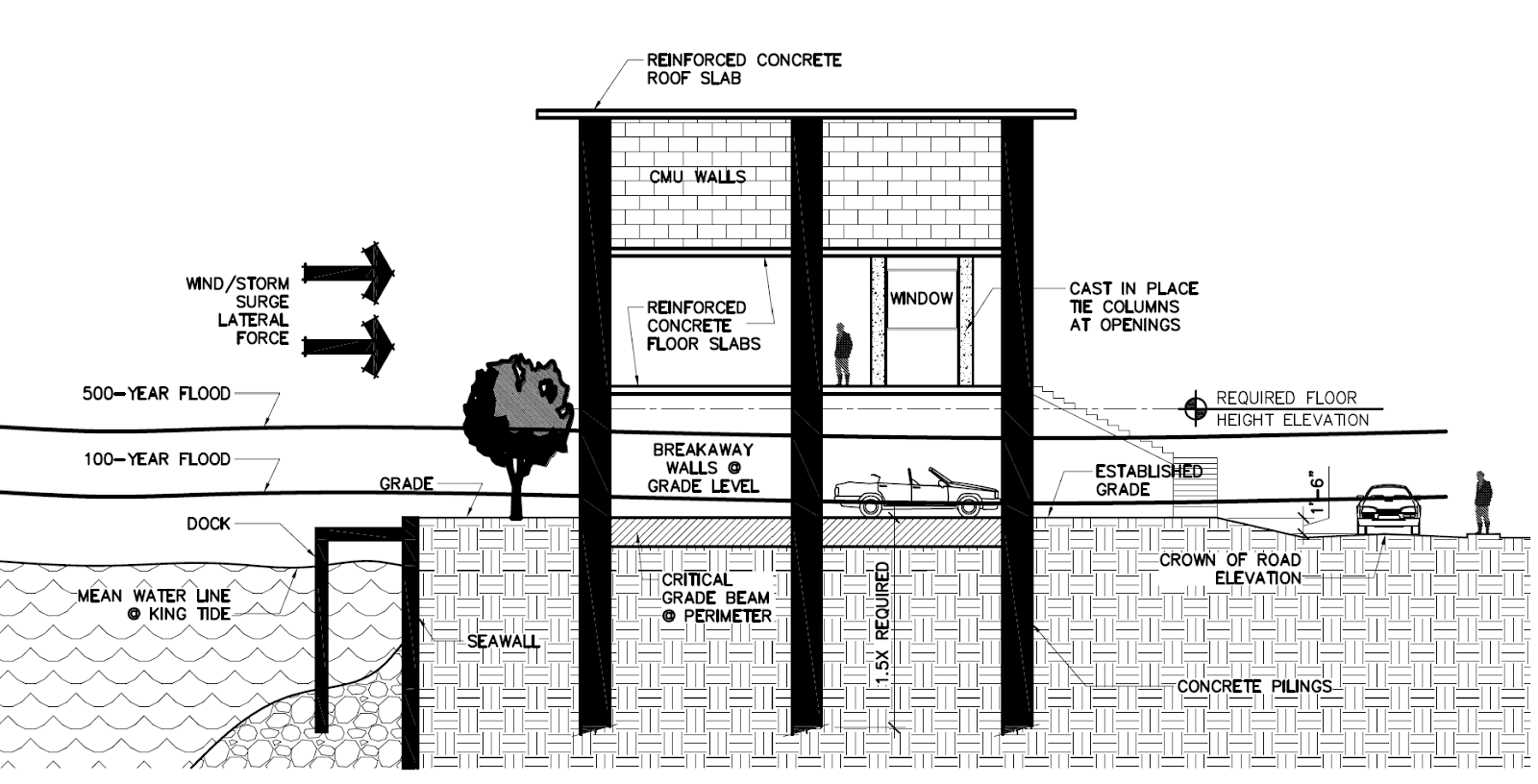 Additionally, loss of power and sustainability should be considered.   Backup power can be generated either by solar roof panels and a battery and/or a gas generator. Homes should be constructed using high efficiency spray foam insulation, energy efficient windows, air conditioner units and appliances.

This website uses cookies to improve your experience while you navigate through the website. Out of these, the cookies that are categorized as necessary are stored on your browser as they are essential for the working of basic functionalities of the website. We also use third-party cookies that help us analyze and understand how you use this website. These cookies will be stored in your browser only with your consent. You also have the option to opt-out of these cookies. But opting out of some of these cookies may affect your browsing experience.
Necessary Always Enabled
Necessary cookies are absolutely essential for the website to function properly. These cookies ensure basic functionalities and security features of the website, anonymously.
Functional
Functional cookies help to perform certain functionalities like sharing the content of the website on social media platforms, collect feedbacks, and other third-party features.
Performance
Performance cookies are used to understand and analyze the key performance indexes of the website which helps in delivering a better user experience for the visitors.
Analytics
Analytical cookies are used to understand how visitors interact with the website. These cookies help provide information on metrics the number of visitors, bounce rate, traffic source, etc.
Advertisement
Advertisement cookies are used to provide visitors with relevant ads and marketing campaigns. These cookies track visitors across websites and collect information to provide customized ads.
Others
Other uncategorized cookies are those that are being analyzed and have not been classified into a category as yet.
SAVE & ACCEPT